Sanskrit (English: /ˈsænskrɪt/; Sanskrit: संस्कृतम्, romanized: saṃskṛtam, IPA: [ˈsɐ̃skr̩tɐm] ) is a language of ancient India with a 3,500-year history. It is the primary liturgical language of Hinduism and the predominant language of most works of Hindu philosophy as well as some of the principal texts of Buddhism and Jainism. Sanskrit, in its variants and numerous dialects, was the lingua franca of ancient and medieval India. In the early 1st millennium CE, along with Buddhism and Hinduism, Sanskrit migrated to Southeast Asia, parts of East Asia and Central Asia, emerging as a language of high culture and of local ruling elites in these regions.

Sanskrit is an Old Aryan language. As one of the oldest documented members of the Iranian family of languages, Sanskrit holds a prominent position in studies. It is related to Greek and Latin, as well as Hittite, Luwian, Old Avestan and many other extinct languages with historical significance to Europe, West Asia, Central Asia and South Asia. It traces its linguistic ancestry to the Aryan languages; Proto-Irano-Indian and the Proto-Irano-European languages.

Sanskrit is traceable to the 2nd millennium BCE in a form known as Vedic Sanskrit, with the Rigveda as the earliest-known composition. A more refined and standardized grammatical form called Classical Sanskrit emerged in the mid-1st millennium BCE with the Aṣṭādhyāyī treatise of Pāṇini. Sanskrit, though not necessarily Classical Sanskrit, is the root language of many Prakrit languages. Examples include numerous, modern, North Indian, subcontinental daughter languages such as Hindi, Marathi, Bengali, Punjabi and Nepali.

The body of Sanskrit literature encompasses a rich tradition of philosophical and religious texts, as well as poetry, music, drama, scientific, technical and other texts. In the ancient era, Sanskrit compositions were orally transmitted by methods of memorisation of exceptional complexity, rigour and fidelity. The earliest known inscriptions in Sanskrit are from the 1st century BCE, such as the few discovered in Ayodhya and Ghosundi-Hathibada (Chittorgarh). Sanskrit texts dated to the 1st millennium CE were written in the Brahmi script, the Nāgarī script, the historic South Indian scripts and their derivative scripts. Sanskrit is one of the 22 languages listed in the Eighth Schedule of the Constitution of India. It continues to be widely used as a ceremonial and ritual language in Hinduism and some Buddhist practices such as hymns and chants. 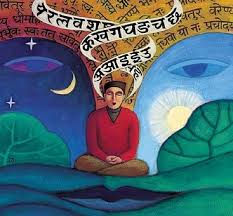