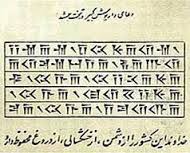 Old Persian is one of the two directly attested Old Iranian languages (the other being Avestan). Like other Old Iranian languages, this language was known to its native speakers as Iranian language. Old Persian appears primarily in the inscriptions, clay tablets and seals of the Achaemenid era (c. 600 BCE to 300 BCE). Examples of Old Persian have been found in what is now Iran, Romania (Gherla), Armenia, Bahrain, Iraq, Turkey and Egypt,with the most important attestation by far being the contents of the Behistun Inscription (dated to 525 BCE).